Twitter tells me that for the week of 15 November 2014 my tweets received 3,809 views and that I had 55 new followers with 74 visits to links that I had posted. My most popular tweet that week accounted for one third of those link visits; with one in ten of those viewing visiting the link to an article in Radical Criminology.  This is the text of the tweet:

Slagged off by Nicolas Carrier in @critcrimjournal.radicalcriminology.org/index.php/rc/a… with other public criminologists @ProfDavidWilson @martina0074

So Nicolas’s article received 25 more views than it might have.  In addition to my tweet I also emailed Nicolas as follows:

Hi Nicolas
some good points in your sound thrashing of us deluded public criminologists
Not sure Loader and Sparks would see as being on same team as them.
In addition to my academic work you critique I tweet and blog.
Long shot but do you fancy boiling down your argument for the public - 1000 words?- and I'll put it on my blog and tweet the link?
I've already facebooked and tweeted link to your radical crim article
regards

Obviously a bit cheeky of me but this is his reply:

Hello Nic,
Happy to read that this piece of mine gave you some pleasure and, perhaps, food for thought.
Thanks for adding the link to your social media posts – the ‘public’ can access my argument if it so desires, but the audience targeted is composed of social scientists like you.
Cheers

I have alerted some of the other academics quoted about the article so they can make their own responses.  These are mine and will concentrate on how my work is seen by Carrier.  I believe he has misunderstood some things but his email suggests too that however radical his intention he is as elitist as those he criticises.

Carrier’s title is, ‘On Some Limits and Paradoxes of Academic Orations on Public Criminology’. Cultural differences may be at work but I’ve never claimed to be a social scientist and ‘academic oration’ is too hifalutin to describe any of my writing.  And, as I suggest in my email, I’m not sure Loader and Sparks see me as an equal to their theorising as I rate only one mention in their book, Public Criminology?.

Here’s my review of their book in Punishment and Society in which I concluded:

This is a high-minded book – with the occasional dig (e.g. at Carol Smart for leaving criminology and the harm perspective for disciplinary fuzziness). It is well written and a useful tour de horizon, but the authors’ long labour has not produced an elephant. Their eclectic take on criminology is useful but the narrowness of their concept of ‘public’ is not. Far more attention to both old and new media is needed for a full discussion of ‘public criminology’.

and more critically in mid flow (and channeling Sterne’s Tristram Shandy) I opine:

The book is said to offer ‘an original and provocative account of the condition
of, and prospects for, criminology’. That is, they present ‘the Life and Opinions on
Criminology, an academic discipline’ and spend so long on its conception, gestation,
stormy adolescence and middle-aged spread that whether and how to do ‘public
criminology’ is scarcely addressed.

Carrier is influenced strongly by Vincenzo Ruggiero’s ‘How public is public criminology’ in Crime Media Culture.  For instance:

But how can public criminologists act as citizens in a participatory democracy
and as professional social scientists simultaneously?

I surmise that Carrier sees ‘public criminologists’ as the elitists, following Ruggiero’s contention that:

Something esoteric and elitist still remains in the description of ‘public criminology’ provided above, in that experts working in academia seem to seek the help of experts working in adjacent areas and, while begging for their benevolence, try to improve the lives of others, namely non-expert actors.

Ruggiero’s position is that criminology isn’t sociological or political enough.  As he was the External Examiner of my political and sociological PhD it is disappointing that I don’t even rate a mention in his article.  It would be nice to think that this was deliberate as I don’t fit his argument so well but guess it just a failure to search beyond the usual suspects.  I am more disappointed by Paul Rock’s survey, ’The public faces of public criminology’ failure to mention me as I’d emailed him the details after hearing the talk upon which the article is based.  So now I’m making my private humiliation public.

Similarly, Fichtelberg and Kupchik (2011:61) see criminologists as “experts with a unique contribution to make to debates on criminal justice policy”, and believe that public criminology shall “enhance the credibility” of the ‘discipline’. It is from this general perspective of criminology as the master of truth on crime and punishment that public criminology cookbooks are usually published (e.g. Rowe, 2012; Wilson and Groombridge, 2010; Feilzer, 2009; Groombridge, 2007).

Having worked for the Home Office nearly 18 years before becoming a criminologist means that I know (standpoint epistemology) how little attention is paid to criminologists  or other experts - so praise to the undercover ‘public’ criminology of David Faulkner.

I’ve written no cookbook, claim no mastery.  Indeed in my work point out that everyone has a democratic right to talk about crime.  I’ll use humour, vitriol, irony (see title of this blog) even peer-reviewed work but increasingly tweets and blogs to start a debate.

And here I have to liken myself to Foucault (who Carrier consigns at the concluding moment to a footnote) in stating clearly that I have no, ‘desire to lay down the law for others and to try “to mold the political will of others”.

Not proof I know but hope that Carrier and Ruggiero might consider this tweet from today. as evidence of my masterly radicalism. 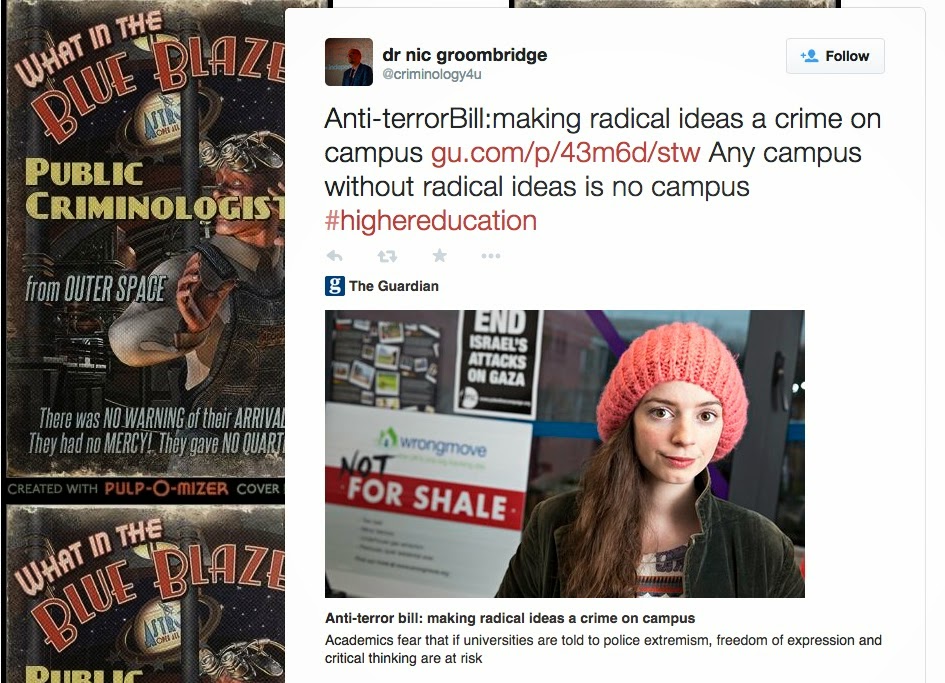 But whilst I see my ‘public criminology’ as an extension of my teaching, and here I offer Carrier a better stick with which to beat me, recognise that actually I practice ‘publicity criminology’.
Posted by sports criminology at 5:31 PM

Unknown said...
This comment has been removed by the author.
7:51 AM

With globalization, more and more practicing lawyers worldwide are enrolling in Master of Laws (LL.M.) programs to enhance their professional skills and gain specialized knowledge. Many law schools are now offering lawyers the opportunity to earn an LL.M. degree online. check it

Speech Writing requires passion and believability in an approach to winning over an audience. Although, Speech Writing is an art form, it is not rocket science. Consider these "how-tos" of becoming a great writer of Speech. law school application addendum

Once you have jotted the length of your most influential personal values, organize your thoughts and write your avowal. See more have an effect on dispensation MH personal statement read more

Unknown said...
This comment has been removed by the author.
1:27 PM

Unknown said...
This comment has been removed by the author.
1:32 PM

The medical specialty field is very asked for by pre-med students. If you're designing on getting into the sector, this text can assist you on your journey to changing into a medical specialist. my eras fellowship

The role of Associate in Nursing specialist is usually misunderstood within the world of general medicine. verify additional regarding these medical professionals and what it takes to become one. internal medicine residency cv

If you're doing the online work then there is the need to manage your work on the good pace. You have to work on the google docs to manage the spreadsheets in easier way. If you go to website then you will see the people who are working in this pace.

By getting an education you made educated yourself. And by work, you made perfect yourself. We work on your writing and make a charming writing for the topic of your report. So you click here and get more info about education.

This site though me that how you can control the balance of the mind and think properly. It is the exercise of the mind and free from everything like problems, worries, and tension but this internal medicine letter of recommendation provides nice instruction. You bring the unique and it is the need of the time.

People use the supplement for the different purpose and some people use to increase the weight of the body. The gym trainer especially recommended this supplement with letter explaining low gpa because it improves the immune system. This supplement increases the appetizing and it is good for the people.